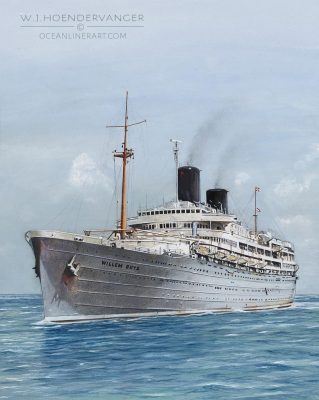 On this watercolor painting I have tried to depict the Willem Ruys from her best side. It shows the ship after her extensively rebuilt in 1965. The great black funnels looks very attractive against the soft grey/blue colors I have used in the sky and the sea. The lighting on her hull gives the painting a lively feeling.

Order your piece of art

The famous De Schelde shipyard in Vlissingen is building  ships for more than 125 years, Today the yard is called Damen Schelde Naval Shipyards and is specialized in building naval vessels.

Hijacking of the Achille Lauro

The former Willem Ruys became worldwide news when the ship was hijacked by four members of the Palestine Liberation Front in 1985.

When the Willem Ruys was ordered by the Rotterdamsche Lloyd in 1938, no one could suspect that the ship would eventually be launched in 1946. The ship remained the entire war on the ramp of De Schelde shipyard. Despite heavy bombing on Vlissingen during World War II, the ship miraculously was only lightly damaged. After the liberation, the fresh water installations of the Willem Ruys provided the citizens with clean drinking water. As a result of the inundation of Walcheren (1944), Willem Ruys’ lifeboats came in handy for transport over water. The Willem Ruys was built as a liner for the Dutch Indies and was later used as a cruise ship. In 1965 the ship was sold to the Italian Flotta Lauro, who renamed her Achille Lauro. During a cruise to Antwerp in 1993, the ship sailed past Vlissingen one last time. A year and a half later, the ship caught fire off the coast of Somalia and sank.

Subscribe here for the newsletter. You will receive 4 newsletters a year with all the latest works, publications and work in progress.

I’m a fulltime Dutch marine artist. I work for private and professional clients all over the world to create an unique artwork of their vessels. Which ship would you like to have a painting of? Contact me with your personal wishes. I’m looking forward to hearing from you.

Besides being a maritime artist I’m also the co-founder of a company which produces 1:1250 shipmodels. Make sure to check out our different (mainly Dutch) scale models. We do accept commissions from shipping companies as well. Feel free to ask for a price quote: More info: BFT1250.nl.